Skip to content
admin 9 months ago 1 min read
Jwala Devi Temple is one of the Shakti Peeth Temples. There is a total of 51 Shaktipeeth in the entire India year. According to the religious texts, the bodies of the Goddess fell on all these places. 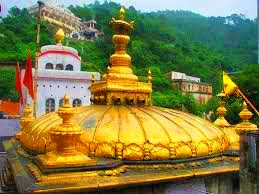 Once for the Goddess’s vision, he went out to Jwalji with his villagers. When his convoy passed through Delhi, the Mughal emperor Akbar’s soldiers stopped him. Presented in the court of King Akbar, Akbar said, what power does your mother have? And what can he do? Then Dhyu said that he is going to protect the whole world.
Akbar Said If your mother has strength then join the horse’s head and make her alive. Listening to this word, Dhunu began praising Goddess and cut her head and provided Mother as a gift. The horse’s head was attached with the power of mother
Akbar built a canal to extinguish the flame and started pelting the army. The water of the canal is not extinguished by the water of the canal. After this Akbar apologized to the mother and offered a parasol of Lord Shiva’s heart.
Akbar’s offering mother refused. After this he remained in the temple for a long time and kept asking for forgiveness.
Also Read
https://amanized.com/2019/07/what-is-the-mystery-of-kedarnath-temple-in-uttrakhand/
Follow: https://www.instagram.com/ghanshala_aman/

1 thought on “What is the Mystery Behind Jwala Mata Mandir?”