Skip to content
admin 10 months ago 1 min read
India defeated Afghanistan by 11 runs to the semifinals, but the Afghan team, which showed great battle in front of a rival opponent, also lost heart by their performance.
Hardik Pandya gave a big blow to Afghanistan’s victory in the 42nd over. He looked at the rhythm and ran Najibullah Zarine on the private score of 21 runs. After 42 overs, Afghanistan’s score is 169/6. 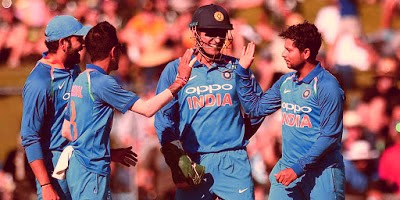 This is the fourth victory in India’s 50th World Cup and the current World Cup. Chasing the target of 225 runs for the win, Afghanistan’s team has all out with 213 runs in 49.5 overs.
Mohammed Shami gave India the first breakthrough in the 7th over He bowled Afghanistan opener Hazratullah Jajai on a personal score of 10 runs.Who scored a hat-trick, gave India a 11-run win over Afghanistan. For the wicket on the third, fourth and fifth ball of the last over of the innings.