Skip to content
admin 11 months ago 1 min read
Subtle Management  Is  The Reason Unprecedented Victory of the BJP –The special thing is that Shah has more meetings than Modi. When Modi made 144 meetings, Shah addressed 161 meetings. Shah feared that the resentment against the candidates could harm the party as in 2004, to overcome this, Shah formed a routine strategy to demolish it. Designed the entire campaign campaign in such a way that when the campaign for PM starts from March 28, then it will be converted to a wave by 7-8 April.
Behind this unprecedented victory of the BJP, Amit Shah has no micro-nano management, which he has done through corporate management from Kashmir to Kanyakumari.
Shah had faxed at the booth and had activated it on a year earlier. For this, the party had created a 22-point agenda, in which special task of linking the social equations to the temple-monastery, NGOs, self-help groups, beneficiaries, co-operatives.
Shah worked out the 120 Lok Sabha seats defeated in 25 clusters and gave responsibility to the big leaders, of which BJP has fielded candidates in 80 seats.
{BJP launched a special campaign of voting before 10.30 hrs According to the Lok Sabha, 442 heads and 10 co-heads are made. 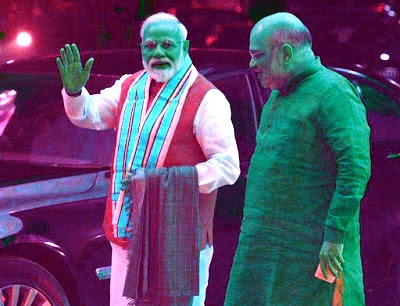 However, in the first and second phase, there was a possibility of loss in UP, especially because the voting percentage was a little lower or in the same way as 2014, after which the Sangh Parivar came forward. and Referring to the plans of the Modi government.
Also read : https://amanized.com/2019/05/modi-said-citizens-filled-the-hall-of-this-fakir/