Skip to content
admin 11 months ago 2 min read
Modi Said Citizens Filled The Hall of This Fakir-He said that the government runs from the majority. The country runs with all the rights. We have to make the countrymen free from all the troubles. Before 2024, the countrymen have to take on the heights. Increasing trust increases responsibility. No one will do anything wrong and bad.
PM Modi said that this victory belongs to the farmers of the country, who persist in distress to fill the nation with the sweat. This is the victory of 40 million unorganized workers.
Addressing the workers at BJP headquarters, PM Modi said that today, millions of crores of citizens of the country have filled up the fate of this fakir. I salute the head of 130 million citizens of India bowing down. The biggest event in the history of democracy is. The highest voting took place in this election.
At the same time, at 5.30 PM, Prime Minister Narendra Modi will go to the BJP office in Delhi. Many big leaders and central ministers will be present along with PM Modi, including BJP national president Amit Shah. Meanwhile, PM Modi will meet BJP workers.
PM Modi said that in this election I had been telling from the very first day that no party is fighting this election, no candidate is fighting, no leader is fighting. These elections are fighting the people of the country. Today, if someone has won, then India has won, 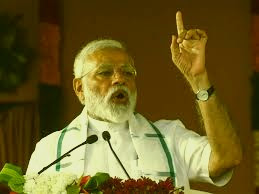 PM Modi said that now there are two castes in this country, the poor and the second caste are those who make their contribution for the liberation of poverty. This victory is the conquest of that mother, who is struggling for a toilet with self-esteem,
Amit shah said that for the first time since 50 years, the prime minister, who is ruled by a full majority in the country, is going to become the Prime Minister again.
The Bharatiya Janata Party will present the claim of forming a government on May 26. At the same time, at 5.30 PM, Prime Minister Narendra Modi will visit BJP office in Delhi.
Also read : https://amanized.com/2019/05/subtle-management-is-the-reason-unprecedented-victory-of-the-bjp/